In selling graves at Beech Grove Cemetery, Tina Sulfridge has had customers tell her they don’t want to be buried close to where the White River flows past. 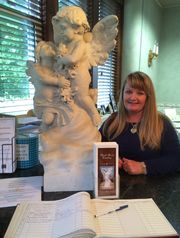 “Because they don’t know how to swim,” she answered.

Sulfridge, who manages the office at the city cemetery, was — pardon the pun — dead serious when she said that, revealing something of why she finds her job so fascinating. End-of-life issues, it seems, are ones that can leave even the most rational of us a bit flummoxed.

As she spoke, the 43-year-old Delta High School graduate, who holds a degree in legal administration from Ball State University, was in her office behind the counter, its heavy marble top a silent reminder of the 44,000 tombstones on the cemetery’s 120 acres.

A kindly, caring mother of two whose children include Bailey, an ROTC freshman at BSU, and McKenzie, a Delta senior and volleyball player, Sulfridge had been at that counter minutes earlier, helping a woman who had visited the week before because her son was dying. Now her son was dead and she was back, checking records and mausoleum sites so his final resting spot would be near other loved ones.

The responsibility weighed heavily on the cemetery employee.

“It’s forever,” she explained, saying her job required firmness softened by compassion and understanding. “So I always try to do my homework here, because you want to do your best to keep families together.” 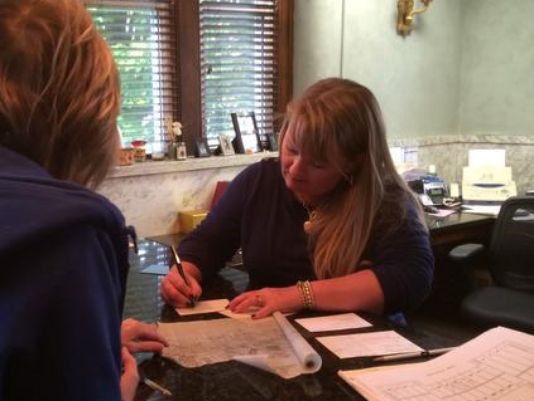 Sometimes, she added, this requires a bit of investigation.

“I love running down information that’s hard to find,” she said, referring to the sometimes lengthy process of discovering exactly who is buried where, or who owns what plot. “The families are so grateful and genuine with their appreciation.”

That’s not to say everyone who walks through the door is in a good mood, of course. There’s nothing like grief to pique emotions, and not long ago a widower stormed in because the flower he had placed on his wife’s grave was moved from one side of it to the other.

“He was extremely upset,” Sulfridge recalled. “It was a little scary.”

Having worked at BSU earlier, she later was a stay-at-home mom until entering the job market a little more than four years ago. Never in her wildest dreams had she imaged working at a cemetery, but when a friend told her about the job, she applied and was hired.

“I love it,” she said with a laugh. “I never would have seen that coming.”

As the only female on the Beech Grove staff, she has developed almost a father-daughter relationship with Tom Schnuck, she said. He’s thankful for her, too.

“We’re fortunate to have her,” said the superintendent, who is intimately attuned to every aspect of the cemetery’s history, but perhaps a bit beyond the median age of the digitally-savvy. “She brings us into the 21st century, which is where we need to be.”

Still, she joked, sometimes, “I just need some girl talk.” In having a sympathetic ear, however, her job provides a form of that.

“A lot of times we’ll have widows come in and they just want to talk,” said Sulfridge, whose husband, Mike, works for General Motors in Marion. “They’re trying to find a new normal.”

While often in the office, she isn’t always there. Sometimes, with maps in hand, she accompanies folks shopping for burial plots on excursions about the cemetery. The aforementioned non-swimmers’ concerns regarding the river notwithstanding, other folks can be pretty picky, too, judging their future resting places by the grade of the land, the nearby trees, and even where the sun rises and sets.

That’s just fine with her, though.

“We do this every day, but they don’t,” Sulfridge said of her cemetery work. “You feel good when you go home at the end of the day. You try to make this as easy as possible.”